I first traveled to Ethiopia with a medical mission in 2007. It was a humanitarian outreach to help the Ethiopian people, specifically the Ethiopian Jews from the Beta Israel and the Beit Avraham Tribes that had come originally from the north, and settled in Addis Ababa and the mountains of Gondar. It was a life changing experience that has forever touched my heart.

The God of Abraham, Isaac, and Jacob revealed His Covenant People, and His prophetic “Lost Tribes” with the Heritage of the LORD, and I had come face to face with them! It is believed their ancestry goes back to the Tribe of Dan.

Ethiopia is listed as one of the three poorest nations in the world and these Jewish people are among them. Their plight is heart wrenching. They are a persecuted people, destitute, desperate, and living as the “poorest of the poor” in unbelievable poverty. They have been rejected and forgotten by man, but not by Almighty God the Father. Now, they will never be forgotten by me! 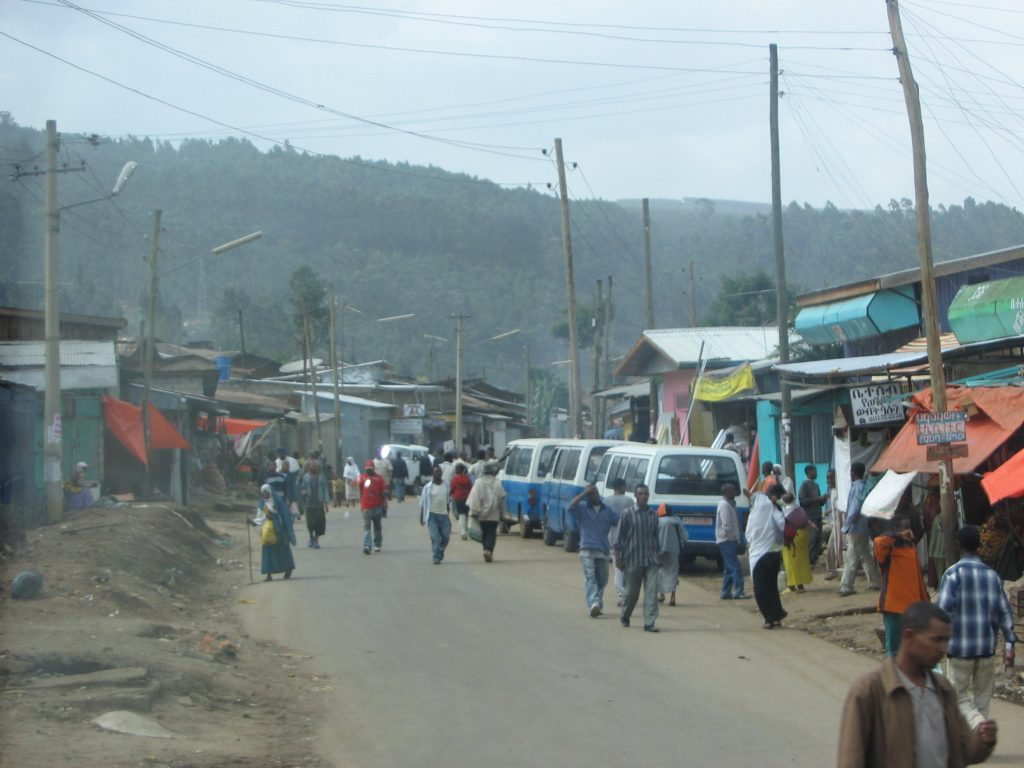 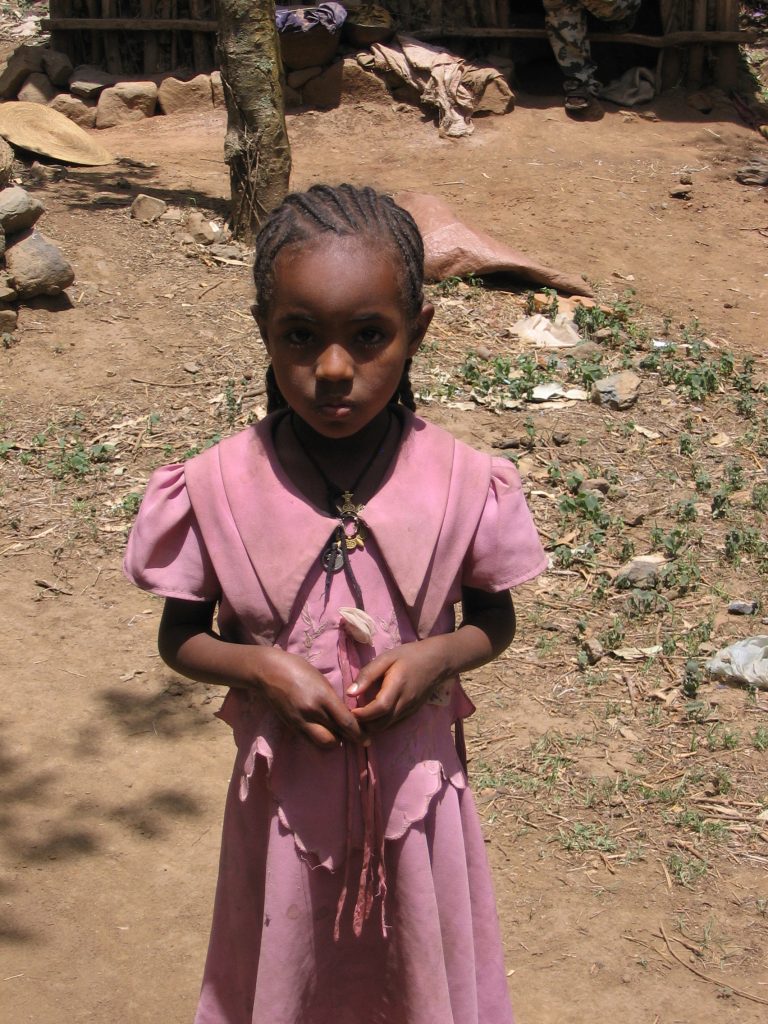 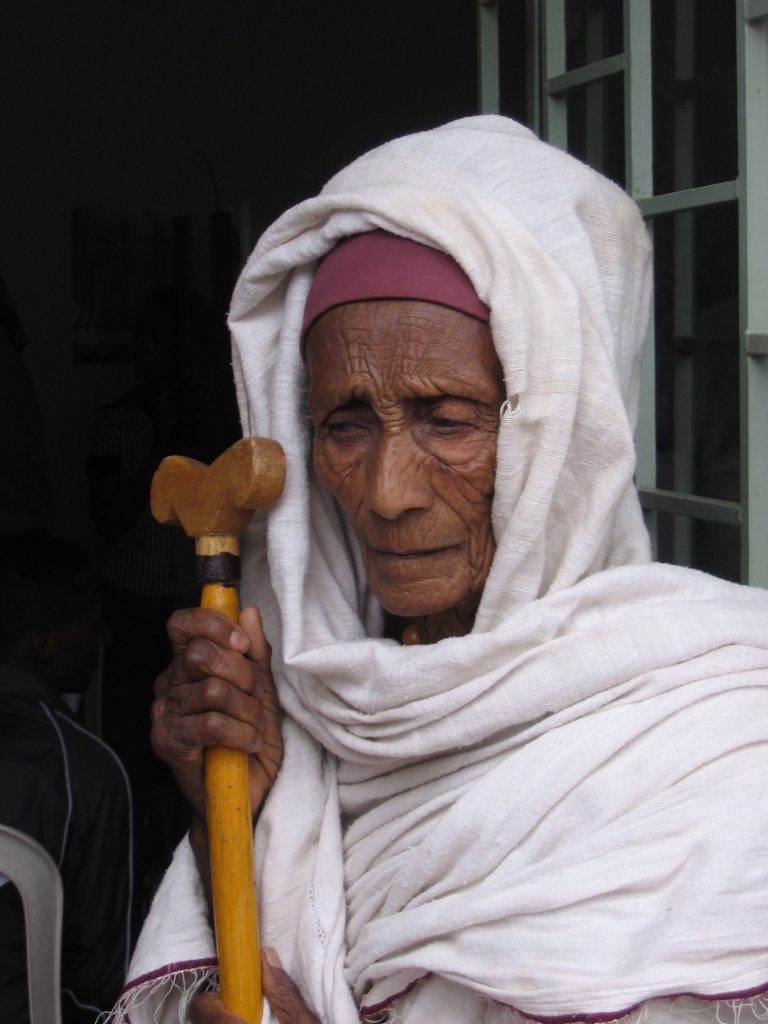 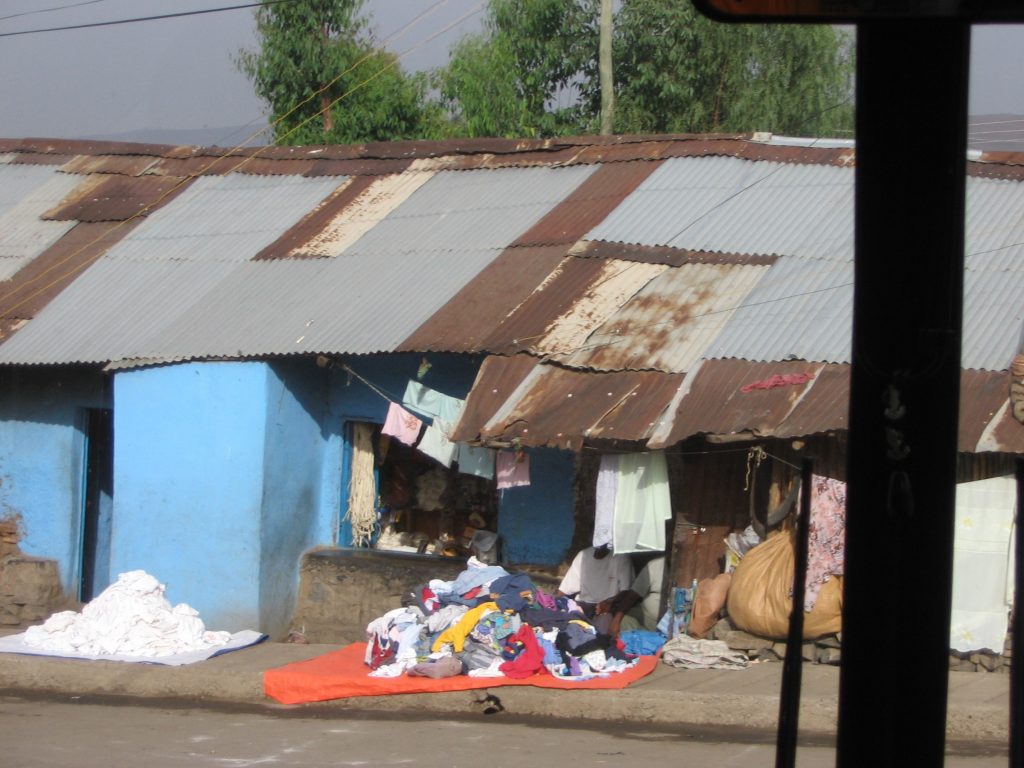 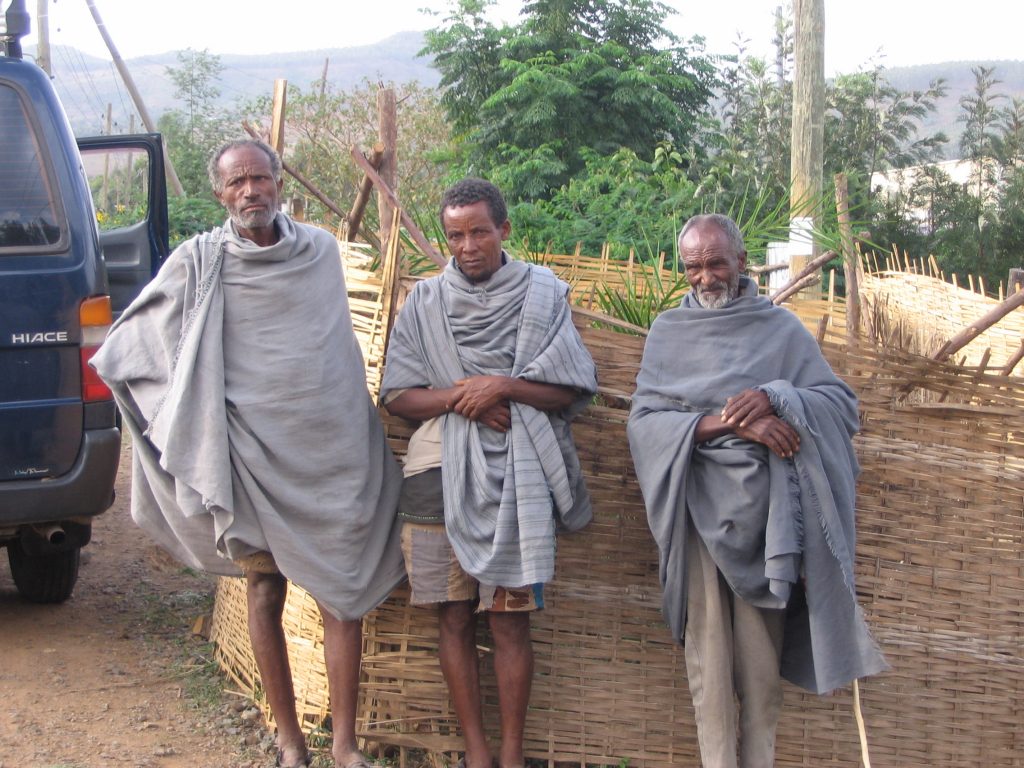 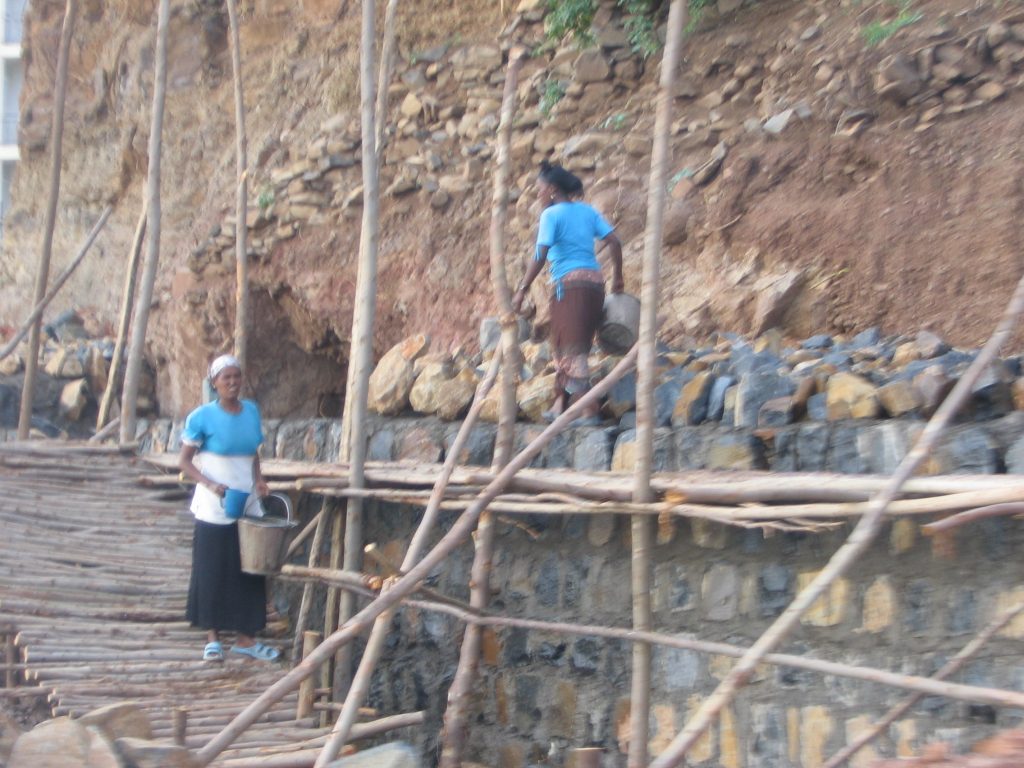 They live in deplorable conditions, in makeshift shacks and huts made of mud with dirt floors. They cook on open flames, there is no electric power, no running water, no bathrooms (they use public pit latrines or open fields), and they bathe out of buckets with dirty water. Their shelters leak in the harsh rainy season and in the winter they are without blankets for warmth. They live in space that is often only one small room for as many as 10-14 people. Some have no room, and share with a relative or friend, just for the evening, carrying their mat on their head from place to place day after day.

Many in their communities have died from diseases and malnutrition, especially infants and young children. Much of their illness comes from drinking and using polluted water with parasites. Many of the young children, as well as adults, have blinded eyes because of the parasites. Their blindness could have been prevented. They suffer from malnutrition and diseases that are preventable with proper sanitation and medical care.

They are greatly affected by hunger, disease, lack of clothing and shelter. Few are employable but those working as laborers earn a meager $.08 per day! Some are skilled as farmers, blacksmiths, tanners, weavers, and potters, trades that bring in little or no income. The majority are illiterate. They receive no assistance from the Ethiopian government. The children in dirty raggedy clothes beg on the streets. Their treatment is inhumane.

The Beta Israel has been recognized by Israel as historically connected to the People of Israel as Jewish descendants. They left their homes in the mountains of northwestern Ethiopia with the hope of beginning a new life in their Homeland of Israel. The Israeli Government began airlifts back in 1984 to “Aliyah” them back Home. The second in 1991 left many families separated as some were taken and others were left behind; permission to return was granted only in limited numbers. They long to be reunited with their loved ones. Only about 22,000 were permitted to go. Still approximately another 20,000 Beta Israel and 50,000 Beit Avraham which are Believer’s, remain.

They cannot return to their homes in the north western mountains of Ethiopia. They abandoned them for the opportunity to immigrate to Israel, and now they are occupied by hostile neighbors. Some tried to go back to their homes and were murdered. The Beta Israel is now considered “displaced”.

They are devout in their desire to serve and obey the God of Abraham, Isaac, and Jacob. They have kept the Mosaic laws over the centuries by a strict observance of the Sabbath; keeping the Feasts of the LORD; circumcision on the 8th day; sacrificing the Passover lamb and eating unleavened bread; observing the dietary laws; distinguishing between the clean and unclean; and the laws of purity.

They are called “Falash” a derogatory term, meaning outsider, wanderer, or outcast by the Ethiopians.
They are rejected and shunned by Ethiopia and left behind and abandoned by Israel.

Because of persecution and rejection by their Orthodox Christian neighbors, many of these black Jews converted to Christianity, in an effort to keep their land and to avoid persecution. They live outwardly as Christians but in reality they maintain and practice their Jewish traditions secretly. They are known as “Falash Mura” and are shunned for their ancient Jewish practices and traditions.

Israel will not acknowledge the Jewish ancestry of those that converted. Because of their conversion, and they are no longer eligible for “Aliyah” to Israel. There is little or no hope they will return to the Promised Land. They continue to pray and believe that one day, the Father will make a way for them to begin a new life in Israel, where their hearts long to be.
The Beit Avraham, were originally part of the Beta Israel and consider themselves as belonging to them even still. They are both from the same origin. The Beit Avraham moved to Addis Ababa when the capital was moved there from Gondar. They are not “displaced” but they are the poorest. Most of them live in Kechene a community in Addis Ababa. They are denied employment, housing, quality education, and access into religious and public places. They stand against persecution, oppression, and discrimination that is social, economic, and religious. They do not deny their Jewish identity, but speak the truth of who they are as Believers.

A people Chosen by the Father, ravaged by war, sickness, disease, and poverty, they have perished to near distinction. The Remnant that remains is not forgotten by the Father. It is the Father’s Heart that they be recognized as His Own and treated with the Love and Respect that they deserve. It is His desire to bring Healing and Restoration to His People.

There is more than a desperate need for Children’s Homes. When parents perish from sickness and disease, the children go to live with family members that are already burdened and struggling for their own survival, how can they make it with yet another mouth to feed? These precious children have little chance at a decent childhood. Rather, their lives are filled with the pain of losing their parents, and they suffer from sickness, disease, poverty and lack beyond imagination. They have no hope, and they have no future!

Will YOU Help?
Your Reward will be Rich both Now & in Heaven!
Lo, Children are an heritage of the LORD: and the fruit of the womb is His reward. (Ps 127:3)

These are beautiful and precious children; H IS children. Their eyes reveal their pain even as little ones. They need a place to live that is clean and safe. A place where they will be fed and clothed; not having to wear filthy dirty rags for clothes; where they can be assured of proper medical care, and an education; a place where they will be treated with love and respect. They deserve a chance at life; and they deserve a future! It is the Father’s Heart for these precious little ones to be rescued. How can we ignore the cry of the poor?

Will you Hear their Hearts Cry?
&
Respond
Today

Your Giving is Tax-Deductible